I wanted to do something in the way of expressing my support, belief, and admiration for Senator Barack Obama and his seeking the Presidency of the United States and, in the process, make history by becoming the nation's first African-American President. After reading his autobiography, "The Audacity of Hope", I came away impressed with his personal journey to "find" himself, being of mixed parentage, and become enlightened as to what his purpose and ultimate responsibility is as a husband, father, and black man living in America. Here is a man who seemed destined, and by design, 'customized' even, to be doing what he is doing now, which is his inherent ability to bridge the gap between black, brown, and white America, and bringing them together. Cynics and doubters questions his experience to lead the nation, yet overlook his proven ability in bringing people together and building consensus--two attributes he inherited from his parents, respectively. These doubters and cynics are blind to the spiritual forces at play. No matter how prevalent they play race against race; that Hispanics won't vote for him, as they did in Virginia, they will do the same in Texas. Why? Because Barack Obama trenscends race for a higher purpose, which is to finally bury the Civil War and all it engendered. His unique gifts equips him to show us how it is done; that as long as we see ourselves as 'victims' and 'victimizers', rather than as a people of a rich, diverse heritage, on a common quest, America will not become a true democracy. 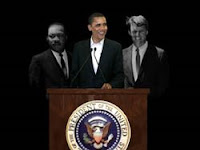 Almost a year ago, few people knew of Barack Obama. Now he is less than a year away of becoming President. Even now it all seems so unreal. Not because half of us doubted a black man could handle the job, but because the other half doubted America would let it happen. But it is happening: a black man becoming President in this eighth year into the New Millennium. Even former President Bill Clinton unwittingly calls it a "fairy tale", but it is real, and it is happening against all our fears, hopes, and desires.