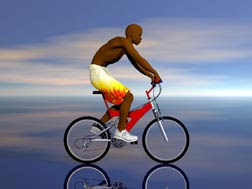 As far as I'm concerned the genre started and ended with him. All the others are pretenders cashing in on the 'House' he built.
at July 14, 2007 No comments: 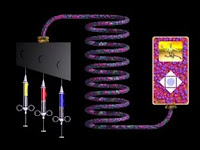 The "digital" in technology has given us an unprecedented degree of freedom and control over how we receive and use information. However, the ease this technology gives us to 'lift' data-- whether it is music, art, or literature--from its context presents a clear and present danger of running the risk of shortchanging our perception and understanding of how our world has come to be. After a while, we will no longer be interested in the "how" and "why" of things, only our consumption of it. This in turn will lead to our ignorance of how our world is put together, and the knowledge of maintaining it and/or rebuilding it, if need be. In our indolence, we will ask ourselves, "Why should I waste time and energy using my mind and getting my hands dirty when my precious machines can do these things for me?" By this time, the machines will rule, and it may very well be too late for us to reclaim the very thing that makes us human, which is our free will.
at May 15, 2007 No comments: 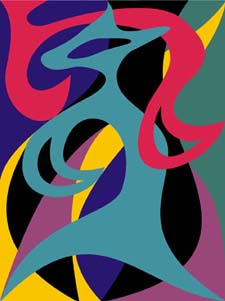 I call this one "Tango". It began as a rough sketch on paper, which I later recreated digitally. I especially like it because it recalls to mind my seriograph prints back in the 60s, when even public advertising was done in the fine arts medium of silkscreening.
at January 28, 2007 No comments: 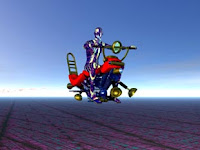 This scene, taken in 484 a.t. (2454 c.e.), depicts the replicant, Hyrynis, a VR Full-Immersion (Holodeck) Programmer, and 9th mate to Kharmyn, High Priestess of 'The Believers', riding his anti-gravity mobile across the Martian plains.
at January 25, 2007 No comments: 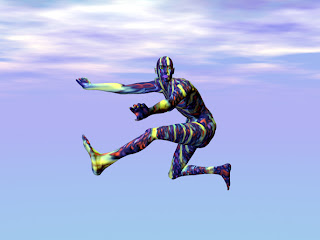 Hyrynis, replicant, age 14 earth years, and employed as a VR Full-Immersion (Holodeck) Programmer, is the 9th mate to Kharmyn, High Priestess of 'The Believers'.

Hyrynis was 'engineered' 14 years ago, 470 a.t., in a genetics lab at Alpherion Base, an illegal outpost on Mars. His genetic base is 99.97 percent human, 0.01 percent Cephalopod genes responsible for producing chromatophores, or cellular pigmentation; 0.01 percent Autotroph's genes, endowing this replicant, and others of his ilk, with the ability to derive energy from light. The remaining 0.01 percent comes from other genetic sources responsible for superior eyesight, muscular dexterity, strength, stamina, augmented neuron transmission, and acute locomotion. Incidentally, the lab was deemed 'Illegal' by the Second Intergalactic Federation for employing A.I. Ultras to work on human based genes. This was taboo because the Ultras had their own agenda for survival and their far superior intelligence made their motives all the more suspicious.
at January 15, 2007 No comments: 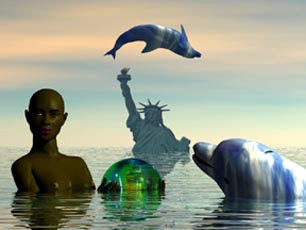 You've seen her in a famous stat-sim where she was photographed (See "Kharmyn II") on the balcony of her penthouse overlooking the space port city of New York 2. Being a Sapient and, no doubt, to her 278 years, Kharmyn is already a woman of considerable power and accomplishment. Having already experienced her life as a starship pilot, sim actress, and exo-archeologist, where she made an enormous fortune trading in alien relics, she is now exploring her as yet untapped potential as a priestess of The Believers, a school of thought based on the ancient texts of Old Earth philosopher, Saint Augustine. Receiver of countless awards, Kharmyn recently won the most coveted one of all: the Sagan, which recognized one whose work crystallizes the hopes, dreams, and promises of Humanity. Having just returned from a 2 year honeymoon at Cygnus-4 with her 9th mate, Hyrynis, a replicant and VR Immersion Specialist, Kharmyn is shown in the stat-sim, above, playing with Chi-Chi and Azura, her beloved, enhanced dolphins she had personally augmented while a student at Cal Tech 270 Earth years ago.
at January 08, 2007 No comments: