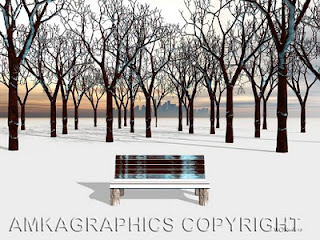 For Christmas 2011, I am pleased to announce new Christmas greeting cards, one of which, is illustrated here. I'm also offering these cards at a 15% discount. Please go to:http://walter-neal.artistwebsites.com/art/all/christmas/all , to check them out. You'll find them in my 'Christmas' gallery. This sale also includes all of my other print designs as well, and will run through the end of this year, 2011. I'm looking forward to your patronage. Thank you.
at November 26, 2010 No comments:

"Love Your Sons, Raise Your Daughters" 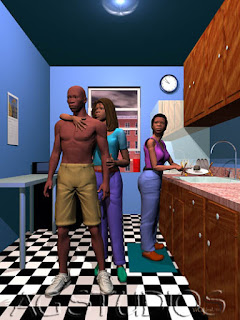 This expresses Elijah Anderson's (author of 'Streetwise: Race, Class and Change in an Urban Community (1990)), where he explores the dynamics of social interaction between police as agents and symbols of mainstream communal efforts to regulate the behavior and social place of black men, and black men in a local community. This give rise to a familiar saying in many black comunities, where black women "love their sons and raise their daughters." According to Michael Eric Dyson, this is a "flawed, attempt to get beyond a theoretical framework that implicitly blames black women for the condition of black men"; whereas James Baldwin, in his last published work, declared it "a disease peculiar to the black community called 'sorriness', where 'Mama," he writes, 'lays this burden on Sister from whom she expects (or indicates she expects) far more than she expects from Brother (who) may never grow up..."
at October 26, 2010 No comments: 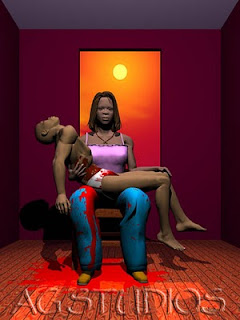 This is inspired by "The Pieta" (1499), a masterpiece of Renaissance sculpture by the renowned artist Michelangelo Buonarroti, housed in St. Peter's Basilica in Vatican City. Where Michelango portrayed a youthful Madonna to symbolize her incorruptible purity, I sought to portray a black mother's painful and fearful dilemma ('Sorriness') on how to enable her black son to flourish as a man, and at the same time, ensure his safety and survival in America.
at October 26, 2010 No comments:

The Meaning of A Friend 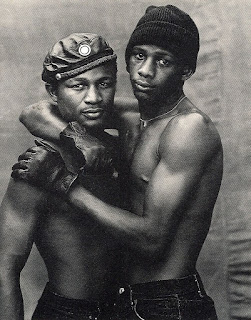 The Meaning of A Friend
Someone turned to me and asked
"How many friends have you?
"Why 10 or 20 friends I believe
And began to named a few...
A blessed one you are
To have so many friends
But think of what you're saying...
A friend is just not someone
To whom you say "Hello"
A friend is a tender shoulder
On which to softly cry
A well to pour your troubles down
And raise your spirits high
A friend is a hand to pull you up
From darkness and despair...
When all your other "so called" friends
Have helped to put you there
A true friend is an ally
Who can't be moved or bought
A voice to keep your name alive
When others have forgot
But most of all a friend has a true heart
For from the hearts of friends
There comes the greatest love of all!
So think about all this
For every word is true
And once again answer please...
How many friends have you?
After much thought I answered
I really only have just one: "It's You!"
A Friend Is Always Special
Because Friends Love You
Just Because You're You! 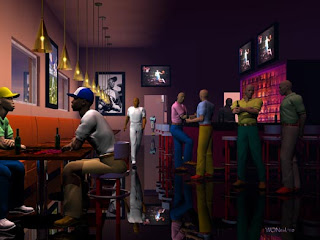 It's Friday, after work, and patrons attend their favorite watering hole to quench their thirst, fraternize, talk sports, and relieve the stress and tensions of the work week. See this work in detail at my website.
at March 09, 2010 No comments: 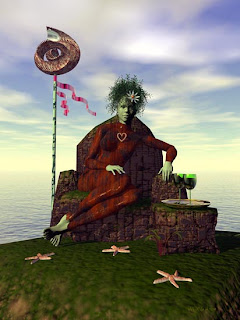 Here, the Greek goddess Calypso, described in Homer's Odyssey 2,800 years ago, sits on her coral throne, awaiting the return of her lover, Odysseus. Calypso, who lived on Ogygia, an island near Malta, was unmarried, independent, and history's first documented feminist. See more detail at: Walter O. Neal@Fine Arts America
at February 26, 2010 No comments: